The Nations Homes For Sale

It’s no secret 51st ave has started to make a name for itself over the past few years. Slowly transforming itself from small rooftops encompassed by industrial centers like auto body shops and lumberyards, The Nations has very quickly established itself as a powerhouse area for growth in the city, especially among Millennials.
Some of those longtime industrial users still dot certain areas of the street, but so do about a dozen newcomers, including restaurants, retail stores, apartment buildings and “coming soon” signs. Whole factories once stacked for storage of heavy machinery are now being gutted for mixed use developments and more retail.
Streets that were once very complacent are now booming with growth and activity from dog walkers and baby strollers.
The price point is slowly growing but compared to places like Germantown and 12 South, the housing market in The Nations is still somewhat affordable. The neighborhood’s name stretches back to before colonization, when different Native American tribal nations would meet there to communicate with each other. Lying about five miles west of downtown, the area is now drawing comparisons to 12 South at the cusp of its development more than a decade ago. Today, 12 South is one of Nashville’s priciest home markets and a red-hot area for commercial tenants.

The nine-block stretch of 51st Avenue North between Charlotte Avenue and Centennial Boulevard is a symbol of the rapid development sweeping Nashville neighborhoods like The Nations as old homes get demolished for new builds and businesses move in to offer residents amenities.

Some of our favorite places to east and explore in The Nations include: Nicky’s Coal Fire Pizza, Frothy Monkey, 51st Market, Corner Pub, The Hop Yard and The Nations Bar and Grill. There is also a growing amount of retail in the area, some of them local only to Nashville such as This n’ That Thrift Shop, Made in TN, and Project 615 (West).

The Mural of Lee Estes 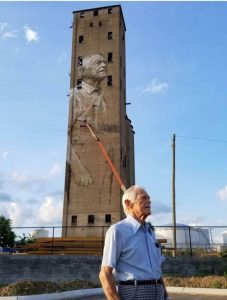 At the end of 51st avenue sits a large silo with a community resident who has become a familiar face as of late.

Australian Guido van Helten was commissioned to paint an old abandoned grain silo in this reviving community of west Nashville.   A former graffiti artist, van Helten travels the globe painting amazingly photographic-like murals on buildings, silos, and shipping containers.   The artist discovered Mr. Estes through discussions with the staff at St. Luke’s Community House.  He wanted to paint a local resident who represented the spirit and history of the Nations area.  According to Mr. Estes, “Guido came to my house and took a few pictures of me.  Next thing I knew, he was up in the air, painting me on the silo, my wrinkles and all!”  He explains it was amazing to watch van Helten work, studying the photos on his phone with one hand while guiding a paint brush with the other.

Mr. Estes, 91 years old and going strong,  continually has folks knocking on the door of the home he’s lived in since the 1950’s.  “They make good offers, but I am not ready to sell just yet,” he says.  He goes on to mention “most of the old-timers have moved away.”  “Those of us still here need to learn to live with the progress and love it,” continues Mr. Estes, with his characteristic glass-half-full attitude.

With The Nations area changing so rapidly its nice to see that the best things aren’t.