Just a few blocks North of downtown, sits Germantown, an 18 square block area that is bounded by Jefferson Street on South, Hume Street on the North, Rosa Parks Boulevard on the West, and 2nd Avenue North on the East. Considered Nashville’s Oldest Neighborhood, it gets its name after being incorporated in the Nashville City Limits in 1865. At this time, a significant number of German immigrants  lived there and were contributing to the booming population of some of the largest houses in the area, characterizing the neighborhood’s economic growth.

Since then, Germantown has become one the hottest areas for growth and re urbanization in the city. With its distinct architecture and stylish restaurant scene it even makes East Nashville blush. Looking for fine dining? Not at a problem. Look no further than Butchertown Hall, 5th & Taylor, and Rolf and Daughters. Some more causal options include: 321 Pizza, Jack Brown’s Burger Joint, Von Elrod’s Beer Hall & Kitchen, and Vui’s Kitchen.

But it doesn’t stop there, Germantown also boasts some of Nashville’s most exclusive retailers such as, ABEDNEGO, ALEXIS + BOLT, and Wilder.

As far as rooftops, Germantown has a fair mix of single family to multi-family zoning. Some of the homes in the area are among the oldest in the city and are unmistakable in both character and style. 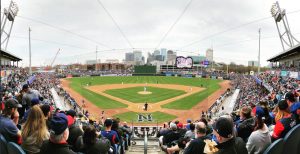 One of the biggest draws to living in Germantown is Sound’s Baseball. After moving from their old location off 8th ave, the city approved a brand new stadium for the Sounds.

On April 17, 2015, First Horizon Park opened its doors to a sellout crowd of 10,459 fans to cheer on the Nashville Sounds in the opener to the team’s 38th season. With 19 sellouts in 71 openings, the first season welcomed a total of 565,548 fans to the park, which was the highest attendance the Sounds had over the previous 25 years.  Since then, the fan base has continued to grow.

The state-of-the-art First Horizon Park includes many special elements that make the venue the best in Nashville. To name a few: a 360-degree game viewing experience; spacious concourses all within view of the on-field action; unique group outing spaces; an expansive club level with suites; LED and ribbon boards; and of course – the signature guitar scoreboard, bigger and brighter than ever.

The Mt. Rushmore of First Horizon Park, the scoreboard located beyond the outfield wall in right-center field features an HD LED screen that measures 4,200 square feet, making it one of the largest in minor league baseball. It would take approximately 860 32″ flat panel televisions to fill the area of the video display.

Also unique to First Horizon Park is the perfect gathering spot known as ‘The Band Box’ in right field, which the Sounds created in collaboration with Strategic Hospitality/Centerplate joint venture, which features several entertainment options, not limited to ping pong, corn-hole, foosball and shuffleboard. With a laid back atmosphere, this outdoor bar and restaurant which features some of the most delectable ballpark fare is ideal for socializing with your friends or colleagues, while taking in a Nashville Sounds game.

All areas of the ballpark, including The Band Box, are available for rental on non-game days for both public and private events. 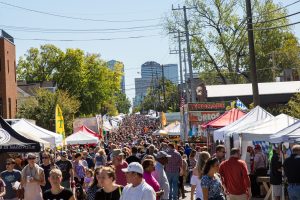 Although only being a seasonal attraction, Octoberfest is worthy of noting because of the humungous draw of both culture and culinary attractions brought to the area for just one weekend.