Donelson is a neighborhood of Nashville, Tennessee about 6 mi (10 km) east of downtown Nashville along U.S. Route 70. It is named in honor of John Donelson, co-founder of Nashville and father-in-law of Andrew Jackson, Nashvillian and seventh President of the United States. It is now incorporated as part of the Metropolitan Government of Nashville and Davidson County.

Donelson is now an example of an early postwar suburb with a stock of mostly half-century old, red brick, detached ranch-style homes that is growing rapidly both size and attractiveness.

Hip Donelson is a growing area near Briley Parkway and home to hundreds of small and medium-sized local businesses. Hip Donelson, a tax exempt 501(c)3 created to promote and develop the local community, lists over 100 Donelson, Tennessee businesses that operate in the neighborhood. Donelson is also home to the national headquarters of HarperCollins Christian Publishers, a new branch of Nashville State University, and over 40 hotels and motels that cater to tourists and business travelers using BNA International Airport.

It is worthy to note that Donelson is the closest city to BNA Airport, which makes anyone who is a  frequent jetsetter makes Donelson an attractive option to live and work. It is also just a 10 minute drive to Downtown Nashville.

In recent years, Donelson has shown high demand as a desirable place to live, and is commonly discussed as one of the next Nashville neighborhoods set for explosive growth. A 2016 article on Realtor.com cited Donelson as the 15th most desirable zip code in the United States. 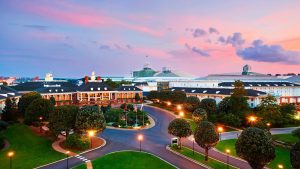 The Gaylord Opryland Hotel. is a hotel and convention center located in Nashville, Tennessee. It is owned by Ryman Hospitality Properties (formerly known as Gaylord Entertainment Company), and operated by Marriott International. With 2888 rooms, it is one of the 30 largest hotels in the world.

The original Opryland Hotel opened on Thanksgiving Day in 1977, on land adjacent to the Opryland USA amusement park. The hotel was originally built to support the Grand Ole Opry, a Nashville country music institution. The hotel at that time had 580 guest rooms and a ballroom

In 1983-84 the hotel was expanded, adding over 400 guest rooms and incorporating facilities to meet the demands of the corporate meeting and convention market. A Garden Conservatory resembling a Victorian garden was added. This atrium maintained a constant temperature of 71 degrees and housed more than 10,000 plants.[4]

In 1988, 2 acres and 797 guest rooms were added to the hotel. The Cascades Atrium was built, including a 3.5-story waterfall and more than 8,000 tropical plants. The Cascades Lobby expanded to 24 check-in stations that could check in 580 guests per hour when necessary.[4]

A 4.5-acre expansion completed in 1996 doubled the size of the resort, adding approximately 1,000 guest rooms, 10 meeting rooms, a 289,000-square-foot exhibit hall and a 57,000-square-foot ballroom. The trademark feature of this addition was the Cajun-themed Delta Atrium, which incorporated a quarter-mile-long indoor river. Flatboats were introduced to carry guests along the river, and past a water feature that included jets which were choreographed to music. When the expansion was christened, water samples from more than 1,700 rivers throughout the world (including every registered river in the United States) were poured into the Delta River. The Old Hickory Steak House, built to resemble an antebellum-style mansion, was also added 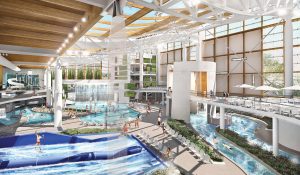 Gaylord Opryland’s newest attraction was completed in 2019, and its a waterpark!

SoundWaves is a brand new indoor/outdoor water attraction at Gaylord Opryland Resort & Convention Center, exclusively available for hotel guests and private parties. To maintain a comfortable and relaxed environment, admission is only granted to guests who book the SoundWaves Water Experience overnight package or a private party room for 10 to 30 people. The upscale experience offers a slide tower, FlowRider wave simulator, rapid and lazy rivers, activity pool, restaurant, adults-only pool and bar, private cabanas, and kids area. The outdoor area will be completed by mid-2019, and will feature additional waterslides, a wave pool, and more. Nashville Guru got a look inside the indoor experience. 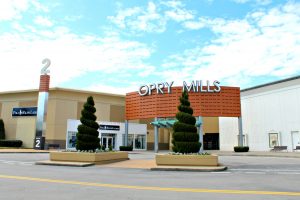 Opry Mills is a super-regional shopping mall owned by Simon Property Group, formerly by its initial owners Mills Corporation and Gaylord Entertainment. It opened in Nashville, Tennessee, in 2000 on the former site of the Opryland USA theme park. The mall is adjacent to the Grand Ole Opry House and the Gaylord Opryland Resort & Convention Center.